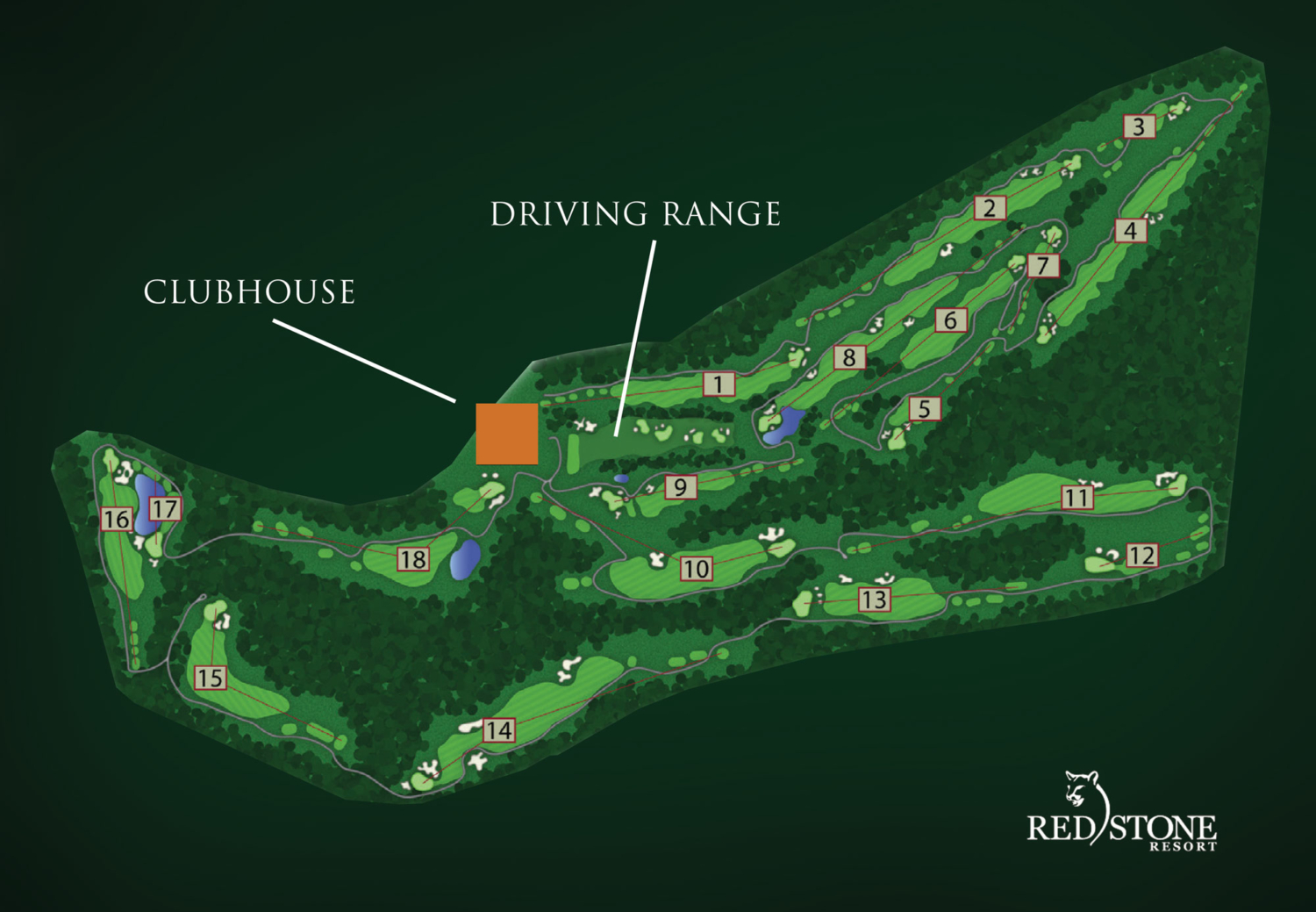 General Manager Jeff Bruce introduced you to the personalities of the front nine; now he describes Redstone’s back nine:

“The front nine is Dr. Jekyll to the back nine’s Mr. Hyde. The front nine is a little more subdued; it’s flatter, with open tee shots, and everything is laid out for you to score. The back nine is Mr. Hyde; you’re basically hiding on every hole, since it’s cut out of the mountainside, and tee shots are a very important part of the game. Even though there are a few tougher sections, they’re there to improve your game while you enjoy the incredible scenery. It’s all about good times and great golf!”

If golf holes had personality, hole 10 would be known as Sinatra. Bella named this one after the blue-eyed crooner because you get to play it your way. You can either lay up across the gully or pound it around the corner. You can drive the ball over, then hit either a wedge or an iron up and over, or you can get aggressive. Higher handicaps will take a 3-wood, 5-wood, or a 4-iron, and just hit it over the gully. More experienced or aggressive golfers may take their driver and try to cut something around the corner, draw it around the bend, and then have a shorter shot to score at the hole. (Pictured – Jeff looking down at hole 11)

This is a hole everybody needs to come up to! Ninety percent of people don’t play from the back tees, but once you’re up the unassuming path and into Fantasia, you get a majestic view. In November, when the leaves fall off the trees, you can see all the way down the Columbia River. It’s a 630-yard par 5 that’s an absolute beast and probably the toughest golf hole in the Kootenays. It’s called The NeverEnding Story because it keeps going on and on…and on. Just when you think you’re done, there’s still a little bit more to go! There are very few people who have eagled it, but it has happened a few times. With this hole, the best way to play is to hit once, hit twice, hit three times — and hope you’re on the green to two-putt.

It definitely takes the ‘Luck of the Irish’ to ricochet off that side bank down onto the green. You want to aim off to the left side of the green and let the ball ricochet (yes, I said it twice…just making sure you get it!) and roll down to the flag — nice and easy, but it’s a hard shot. What happens for many on this hole is the “stay-n-play”: the ball stays on the side hill and you’ve got to keep playing; or, more accurately, you’ve got a lot of work to do.

Cary nicknamed this hole; if you’re a Will Ferrell fan, maybe you’ll recognize the reference to Talladega Nights: The Legend of Ricky Bobby. This hole is very difficult to par; usually, when you do get a par, you’ve hit some dirt and you feel a little dirty when you’re done. On Mike Honcho, you want to take your driver, your 5-iron, or your 4-iron — they’re all going to end up in the same spot: right in the middle of the fairway. You’ve got danger on the left — out of bounds bush — and utter danger (sand) — on the right. If you can get here unscathed with a par, you’ve done very well. Your goal is to drive down between the 150- and the 100-yard marker. It generally leaves you at 130 yards, the only flat spot to an extremely elevated green, built on an old mine shaft and hidden by thumbprint bunkers. This is the most left-handed friendly hole on the course — and since I’m a lefty, it’s my favourite! You want to aim for the duck-shaped bunker on this one. When the course was redesigned and the back nine was added to make an 18-hole golf course, Les Furber did a great job of putting in some little helpers for the players to know where to aim. So, if you’re going to be up here on the blues or the whites, and you’re going to be driving the ball, aim for the duck’s bill. You’ll end up right in the middle of the fairway with a beautiful shot. If you aim for the duck’s bill, believe it or not, you’re going to end up right where you need to be, because everything funnels to this side of the fairway. You’ll still have another 260 yards to go. It’s a beautiful par 5 — a leftie’s dream because you’ve got the natural tail and it’s heaven. The bunker is there to protect you, too, so if you hit the ball too far, it’ll keep you from going into the woods. That’s your goose, because if you goosed it too far, that bunker is going to save you.

On hole 15 there’s a big chunk of granite, which is rusty red because of the iron in the rock. Rossland’s mineral-rich rock is due to volcanic rock, but don’t worry — there’s no risk of a volcano erupting here. The safest play here is to aim for the middle of the red stone. That will leave you a 150-yard shot into a beautiful golf green tucked amongst some truly gorgeous cedars. As you approach the hole, you’re protected by two bunkers that are guarding the green. It’s just beautiful all around this hole.

The bigger hitters are going to try and drive this green on this one. It’s a short par 4, 295 yards from the blue tees. The smarter golfer is going to play it differently; they’ll just hit it 150 yards, and 150 yards again, and walk away with a great chance at a birdie or par. If you get aggressive, it’s going to eat your lunch. Since bigger hitters are going to try and drive it the whole way and putt for an eagle, it’s a beautiful risk-reward type hole. If you’re in a match and play smart, you’ve got a great chance at beating your competitor.

From hole 17, you’ve got a lovely view of “Lake Redstone,” where salmon charters are available year-round. We have it all! This is a par 3, and you better hope and pray you don’t hit it in the lake and have to go to the drop zone. This is a very straightforward golf hole with a whole lot of carry, so grab your favorite club. It’s 130 yards to put it in the middle of the green; let’s hope you pray hard enough.

Bella likes calling this one Tuck because it reminds her of skiing, where you’ve gotta point your tips down and trust your line. And just like at Red Mountain, that’s what you’re doing here; when you’re setting up your drive, find the line that you want. As you’re driving, you’ve gotta trust the direction you’re hitting in. If you don’t trust it, you’ll either end up left in red state creek, or right in the pond. And if you go too far, too fast, you’re going to run out of end zone. We’ve been climbing for the last eight golf holes, but we’re coming down on this one and everything goes straight down. Be careful here because it can get a little slick from time to time. But in the wintertime, there is no better place to toboggan in Rossland than on the 18th hole!